Article in Control Engineering: Deploying robots and drones in process plants and facilities 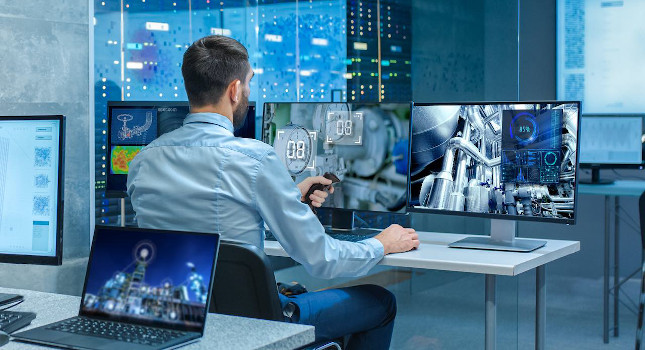 Robots have long been used in discrete manufacturing and machine automation applications, and their use is now spreading to address process industry applications.

Process plants need leaner and more efficient operations to cope with aging assets and workforces. Key technologies for reaching these goals are robots and drones. They can be used to enhance safety while improving productivity and operational efficiency, especially in hazardous environments.

In general, robots and drones are better at performing routine tasks than humans, who typically prefer and excel at more creative uses of their talents. Routine tasks are boring for humans, and because of this natural characteristic, they sometimes skip routine safety procedures and ignore dangerous signs in the field. However, robots can be designed to execute these types of tasks without skipping steps.

Robots and drones also can relieve humans from working in hazardous environments, as well as perform some tasks humans are not willing to do. Their capabilities allow them to perform more mundane and dangerous jobs while freeing up workers for higher-value activities.

Robotics are not new to the process industries. For decades, they have been used in dangerous environments such as deep-water oil exploration, subsea inspection, and hazardous plant areas. Robots have been effective in these applications. They are, however, highly specialized and expensive, but technology advances are addressing these and other issues.

Advancements in sensing, computing, and connectivity technologies are leading the robotics revolution. Advanced sensing and microelectromechanical (MEM) technologies are being used to make robots more functional, less expensive, smaller, and lighter. Smartphones helped in the development of advanced MEM technologies at low cost with a small form factor. This dramatically increased market adoption, and these technologies are now being applied to improve robots and drones.

The convergence of all these and other technologies has created space for innovation, with robotics one of the main beneficiaries.

Mobile robots, drones: How they help

In general, mobile robots and drones must perform two main functions. One is mobility, which requires a means of propulsion, along with multiple onboard sensors for guidance such as light detection and ranging, high-def cameras, infrared cameras, and others.

This allows robots to move forward, backward, sideways, and in curved paths while avoiding obstacles, climbing stairways, and performing other necessary movements. It also allows drones to avoid obstacles in flight without the need for constant human monitoring and control. Figure 1: Many different types of drones and mobile robots are being used to perform various tasks in process plants. Courtesy: Yokogawa

The second main function of robots and drones is related to the specific task and application. For example, robots use gas sensors to detect leaks, high-definition cameras to read gauges, and infrared cameras to measure temperature. On rotating equipment, robots use microphones to detect abnormal noises and vibration sensors to detect excess movement. Drones use cameras to transmit video information to operators, and they carry payloads to remote areas.

Asset inspection and maintenance has been the first target application for robotics in the process industries. The SPRINT Robotics Consortium is a user-owned and -managed organization, with its main objective collaboration on a new industry-driven initiative to promote the development, availability, and application of robotic technologies in technical inspection and maintenance of capital-intensive infrastructure. Early targeted application areas include the inspection of pipelines, storage tanks, and pressure vessels. Remote control robots are particularly useful in these and other hazardous environments.

A variety of robot form factors such as crawlers, snakes, drones, etc., are available, with each having unique capabilities designed for specific applications (Figure 1).

Crawler robots can move around plants and facilities to perform many of the same tasks as human operators making rounds. Dog and human form factor robots can perform simple repairs. These types of robots can be equipped with manipulating arms able to turn valves, paint structures, push buttons, and even replace electronic boards in cabinets.

To achieve the highest levels of effectiveness, it’s necessary to deploy, maintain, integrate and coordinate the actions of these different robots.

Deploying robots in an industrial environment requires more than just purchasing and installing individual robots. Robots must be trained to perform specific tasks effectively, and they must be maintained and repaired. Each robot must be deployed based on its suitability for often hazardous environments, and best practices and regulations must be followed.

For example, since most mobile robots for industrial applications are battery-based, recharging or battery swap is required every few hours. This simple task can become very complex if the robot is working in a hazardous area, where careful planning is required to achieve maximum efficiency while maintaining safety.

Robot training is commonly required initially, whereby a general-purpose robot is programmed to perform a specific task, following either pre-designed routes or autonomously. Instead of generating lines of code to program robot operations, some manufacturers offer a training function. This allows users to deploy and guide a robot with a touch screen interface to create a robot trajectory, with robot programming automatically generated based on this user input.

A mobile robot management system is needed to schedule and manage the wide variety types of robots and drones deployed in an industrial plant or facility, with integration made easier if robotics with open interfaces are purchased.

Another important aspect of robot and drone deployment in the process industries is integrating vast amounts of information. Most robots and drones carry multiple cameras, along with many different types of sensors, which produce information that must be stored, integrated, and made available. Operators prefer one graphical interface to show an overview of multiple robots and drones, but also require the flexibility to deep dive into each sensor or camera (Figure 2). For example, if a robot detects a leak or an abnormal noise from rotating equipment, operators need to be alerted immediately, and will shortly thereafter require much more detailed information to quantify the problem. Depending on the level of abnormal noise from an item of rotating equipment, required action can range from none required at this time to immediate shutdown.

As robots and drones proliferate in process plants, it soon becomes impractical for operators to work with a different graphical interface for each. Information integration becomes very important to create a common graphical interface where operators can view the actions and alerts from each robot and drone. Adding to the complexity of the integration task, some of this information will need to be sent to other automation platforms, such as real-time control and asset management systems.

One example is emergency services, where a drone acts as eye in the sky to guide a ground-based robot to perform urgent tasks, such as shutting off a local manually operated valve. Another example is collecting samples, where two robots can collaborate with each other, with one robot operating a valve and the other holding a container to collect samples. One robot can be used to open the door of a storage unit, while the second robot goes inside to pick up material or refill a container.

These and other types of robot operations require close coordination, typically provided by an integrated robotics management system.

Robots can handle some dangerous applications in process facilities.

Integrating vast amounts of information is another challenge that operations in process facilities face.

The rise of artificial intelligence and machine learning make robots and drones smarter and more efficient.

What benefits could mobile robots and drones provide to your process facility?

Dr. Penny Chen is the principal technology strategist in Yokogawa’s marketing headquarters, based at the company’s U.S. Technology Center. She is leading the Yokogawa Robotics Task Force and is responsible for technology and marketing strategy for robotics, wireless, networking, and other areas. Chen received a Ph.D. in Electrical Engineering from Northwestern University.

Various types of robots will play different roles to best suit the wide variety of applications in industrial environments. Foreseeing the upcoming challenges on using robotics as one of the key elements to realize fully unmanned operation, Yokogawa has established the Yokogawa Robotics Task Force (YRTF).

YRTF’s objective is to establish a robotics service platform that will go beyond Industry 4.0 for the support of unmanned and autonomous remote operation, condition monitoring, asset management, and maintenance. The goal is to collaborate with industry partners, as well as the academic community such as university research labs, to create an ecosystem where various vendors can work together to provide the integrated robotics management systems required by plants and facilities.

To further these efforts, Yokogawa is currently creating a partner ecosystem to evaluate market availability for robot and drone technologies. For example, Yokogawa has recently announced a partnership with ExRobotics to accelerate the adoption of robotics technology for remote inspection in hazardous environments using its IECEx/ATEX certified robot ExR-1.

Thank you for your interest! Please check your inbox (or junkmail) to confirm your subscription with SPRINT Robotics!